Choose the health content that’s right for you, and get it delivered right in your inbox.

2 items. To interact with these items, press Control-Option-Shift-Right Arrow

Bill Washburn, 76, RN, has participated in both the polio and COVID-19 vaccine rollouts, bearing witness to over six decades of vaccine science between the two historic immunization campaigns.

The polio epidemic, which peaked in 1952 with 58,000 U.S. cases, mostly involved children and adolescents. While the majority of cases had minor symptoms, the psychological toll of the disease was enormous.

“People in America were afraid,” said Jeffrey Kuhlman, MD, MPH, AdventHealth chief quality and safety officer, and former White House physician. “It was psychological. It was devastating for a family to think about their teenage boy waking up one day and not being able to move his legs.”

When the polio vaccine was developed in 1953 by Jonas Salk, MD, of the University of Pittsburgh, it was the first time scientists “succeeded in preparing a safe killed-virus vaccine…that included all three strains of polio virus,” according to a 1956 article in The Herald of Health.

“I remember people being put in iron lungs, which they don’t use anymore,” said Washburn. “And I remember the vaccination that they gave us.”

Today, Washburn, a Vietnam War veteran, spends his days serving in the COVID-19 vaccine clinic at Texas Health Huguley Hospital Fort Worth South. Unlike the polio epidemic, the COVID-19 pandemic has spread across the globe via a respiratory virus. There’s been more than 100 million cases worldwide.

Washburn administered the very first coronavirus vaccine at Texas Health Huguley, inoculating Jason Seiden, MD, a pulmonologist affiliated with the hospital. Additionally, he received his own first dose that day.

“I had a very mild reaction,” he recalled. “Just a sore arm afterwards that lasted several hours. Then the next day, it was gone.”

Washburn has been a nurse for nearly 50 years. He said he remembers a time when wearing gloves to start an IV wasn’t common practice, and when glass syringes were sterilized and reused ­– before disposable ones were developed.

No doubt health care has greatly advanced during his career, including vaccines. In 1999, the Centers for Disease Control and Prevention (CDC) listed vaccination as the top “Great Public Health Achievement” of the 20th Century. Now in the 21st Century, Dr. Kuhlman says that “vaccines are safer and more efficacious than ever before.”

Since 2000, inactivated polio vaccine has been the only polio vaccine used in the U.S. It’s joined by other vaccines like HepB and MMR in the immunization schedule for children. Also in the schedule is the influenza vaccine, which is an annual vaccination of one or two doses. While SARS-CoV-2, the virus that causes COVID-19, has shown some variation, it’s unclear today whether it will require an annual vaccine like the flu shot.

“We need to measure how long the neutralizing antibodies are maintained after injection to determine the periodicity of boosters,” Dr. Kuhlman said.

The first two coronavirus vaccines available in the U.S., Pfizer-BioNTech and Moderna, are groundbreaking for their use of messenger ribonucleic acid, or mRNA, to help individuals develop antibodies that make them less susceptible to the disease.

Coupled with vaccination, adherence to public health measures like hand-washing and covering coughs and sneezes, could one day make COVID-19 a forgotten disease, just like polio is in the U.S. today.

At Texas Health Huguley, Washburn is proud to serve at his hospital during this crucial recovery period.

“I’m just thankful I’ve been able to help vaccinate people and that God has blessed me to be able to work all these years,” he said 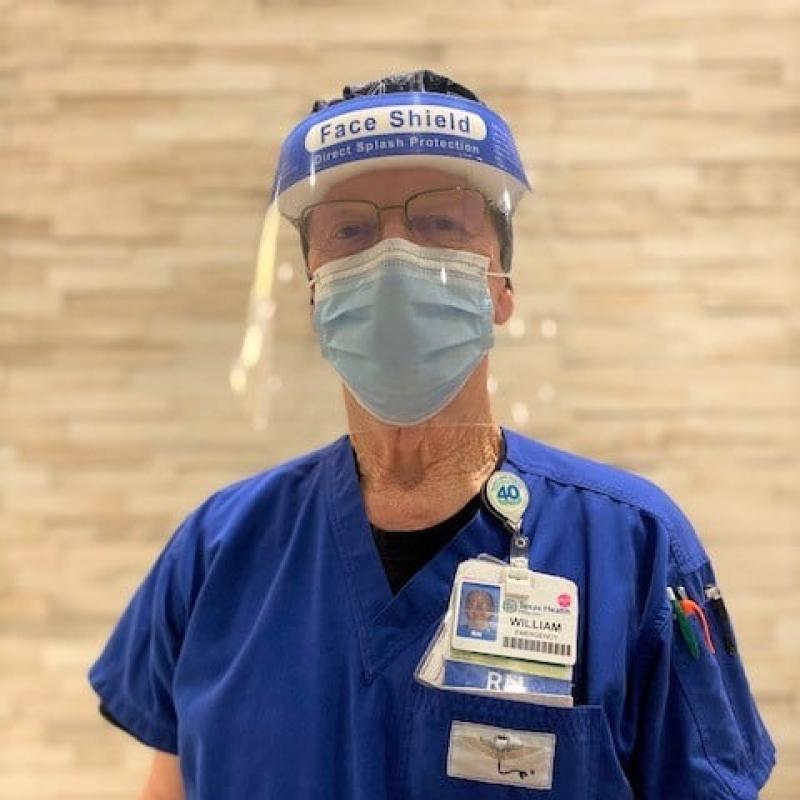 2 items. To interact with these items, press Control-Option-Shift-Right Arrow

6 items. To interact with these items, press Control-Option-Shift-Right Arrow